Race report from our very own Gemma Marshall at Ironman Barcelona!

I actually thought this race would never happen…I booked it in January while I was stuck on the sofa post-operation as part of my ‘year for achieving big things’ and it has seemed to take an absolute age to come around. I was climbing the walls with anticipation for the last 2 months and just wanted to get on with it.

This is the first race I’ve been quite apprehensive about, I knew I could get round the course - Blair had prepared me perfectly for that with his coaching and training plans, I’m by far the fittest I’ve ever been - the issue was that I’m not a ‘finisher’ I’m a ‘racer’ and I wanted a good time and a high placing in my age group.  The truth was, I didn’t really know how I would be pacing such a long race and I was terrified I’d crash and burn - resulting in neither finishing nor racing!!!

I actually had a really good nights sleep that night.  So good in fact that we overslept as the alarm was still on English time.  I forced down some porridge and a boiled egg and was promptly sick. That’s a first. Nutrition plan already in deficit and I’ve not even left the house.

Arriving at the venue I felt strangely calm, we watched the sun rise over the sea.  I was itching to get going but again, it seemed to take an age to come!  I did my final checks in transition, the obligatory half an hour queue for a wee and got in to my wetsuit.  I had to drop my ‘street clothes’ bag off before my swim and lost my dad, his wife and my boyfriend who were supporting me.  I panicked as I searched the huge crowds and time ticked away. I had to give up and go to the start pen, I was gutted - I was desperate to see them before I started. 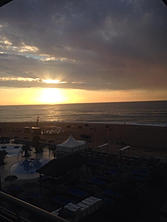 The swim was a rolling start, which is a first for me.  You start in the designated area for your predicted swim time. As I walked through the crowds I saw my dad and boyfriend stood at the barriers, I was so relieved - a quick lean over to let them know I was fine and excited and off I went to find my position. I stood in the 1hr5-1hr10 section and started to wonder what on earth I was thinking!!

The starter horn went off and everyone calmly moved forward.  Your race didn’t start until you crossed the timing matt so there was no need to push forwards.  It worked perfectly and there was a steady stream of swimmers entering the water.  The surf was a bit rough and you had to fight against the waves to reach the first buoy. The reward for getting to that buoy was a hefty kick to the ribs by the lovely guy to my right, who decided not to turn right like everyone else and to swim on straight.   You couldn’t see the buoys in the chop and sighting was almost impossible.

By the time I reached the final leg I’d forgotten that I’d have the waves to deal with on my exit.  I tried to swim to the shore as if it was a lake, I was almost there and then CRASH, something hit me from the back of the head pushing my face in to the sand and pushing me forwards…..shit! Waves! As I was starting to be dragged back out to see a hand grabbed me and lifted me up, pulling me to my feet. I was in fits of giggles and couldn’t believe I’d forgotten I was in the sea!  I was so lucky there were safety marshalls on the beach!  I saw my dad at the side, gave him a quick wave and ran up the beach, still giggling.

It was compulsory to put your bike shoes on in the transition tent so that was a minor faff, but I was pleased to reach my bike and see that there were very few others missing.  The mount line was chaos, there was a wall of men stood trying to clip a foot in to their pedal and no space to get through.  I vaguely remember calling one chap a ‘moron’ for being so stupidly in everyone’s way  - doesn’t he know we’re racing here!?! 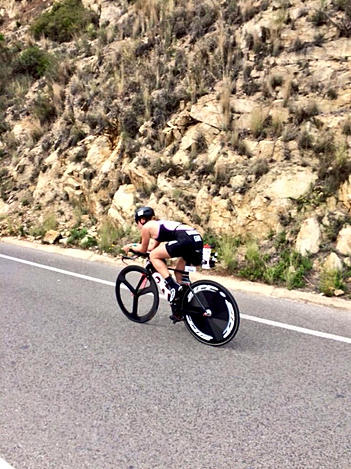 The bike is always my favourite part of a tri, and this didn’t let me down!  It wasn’t ‘flat’ as advertised, but only slightly undulating, which still means FAST! I reached the first 40km in 1hr6 which is only 3mins slower than my 40km TT PB. Oops!  I always get a bit excited on my bike and this was no exception! The return leg was equally as fast and I maintained a nice even pace for the two long laps.  I started to drop a bit on the final  short lap as the wind picked up and I started to tire. I’d beaten my target and I’d had a brilliant time. I was however, for the very first time, ready to get off my bike.  There was also a lot of drafting, two irish ladies in particular passed me with millimetres between their wheels, as they team-time-trialled away I saw that they were older than me and wouldn’t affect my race. There were however a lot of people squeezing in to the penalty boxes and deservedly so. 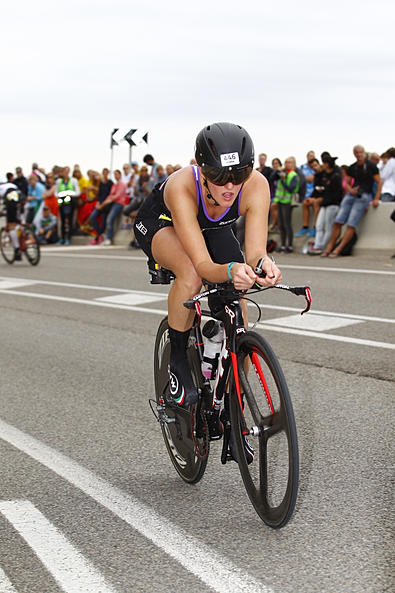 T2 was different for me, a quick loo stop and a little sit down so I could put on my InjiNiji’s - toe socks - for the marathon, I always struggle with toe blisters and figured it was worth the extra 20 seconds to put them on.  I  still had a really quick T2 in less than 3mins.

The first km of the run felt ok, better than I’d expected. (Little did I know, I was running the first mile at my km PB pace…ooops!) My dad, Gill and my boyfriend were on the course and gave me some encouragement, seemingly surprised that I was so smiley!! ‘I’ve got this’ I thought to myself…..only for my body to reply ‘Actually you need to stop for the loo and you need to be sick.’ 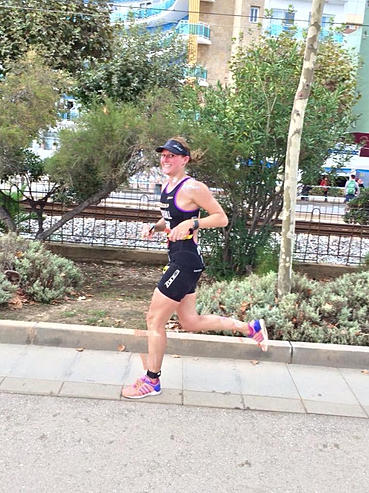 So….I stopped at a portaloo, no paper and poo everywhere, yes, literally EVERYWHERE.  I may be an ‘Ironman’ by the end of the day but I’m still a lady!!  On I ran, struggling with the pains in my stomach so much I could barely move!  There was no paper anywhere, I panicked and didn’t know what to do!!  I couldn't possibly go to the loo without any loo roll!!  I gave it some more thought.  Nope, I can't.  10km and the first lap over with I resigned myself to a sponge! (OMG yes I said that) so I kept a look out at the aid stations for sponges…nope, they’d run out already! I was getting slower, barely able to move for the pain in my stomach and the about-to-be-sick feeling in the back of my throat.  I couldn’t take on any nutrition because of it either.

Also, I was gutted when I’d completed the first lap and I wasn't given a coloured band to show my achievement. No one had lap bands, and it was quite a mental blow. You couldn't see which lap the other competitors were on, so you had no idea who you were racing.  Anyway….back to the bigger issue….…

Finally at the end of the second lap I found a roll of paper on the aid station table, I was so pleased I could have cried! Grabbing a handful and staggering on to the next portaloos I started to feel like my stomach would finally get back to normal. But no. My body did not want to go, at all, despite the loo roll in hand! Back out of the loo and I staggered on, stopping again at the next one. Nope, still the same, my stomach felt horrible and there was nothing I could do about it.  Starting the third lap and passing my boyfriend I could see he was concerned about my time, I stopped and leaned over the barriers to tell him what the problem was….there was nothing he could do to help (I’m not really sure what I expected him to do?!) so off I staggered again, trying to run until my stomach screamed too much and forced me to walk. I ran and walked the rest of the third lap.

I’d set myself a maximum 12hour target, at the start of the final 10km lap I had 1.5hrs to reach this.  That should be really really easy, but I was suffering with my stomach so badly I thought it would be close to achieve.  I passed my wonderful support team who tried offering me every type of food under the sun as they knew I’d been unable to take on anything so far, I thanked them and refused, pointing to my stomach and shaking my head, puffing my cheeks out in an about-to-be-sick fashion.

One km in to the last lap my stomach seemed to settle a bit and I managed to run for the longest time so far, I’d walk for a little bit then set myself a target to run to before walking a little again. It seemed to be working. My stomach was shouting now rather than screaming and I was making some progress towards my 12 hour target.  Then my watch ran out of battery. I had no idea what the time was and it was getting dark! It must be nearly 12 hours. I panicked a bit and pushed harder to run more, having to slow to walk again until the stomach pain eased enough to pick up the pace.

Coming in to the final km I began to smile again, I’d done it! It hadn’t gone to plan, but I made it to the end.  I started as a ‘racer’ but completed as a ‘finisher.’ 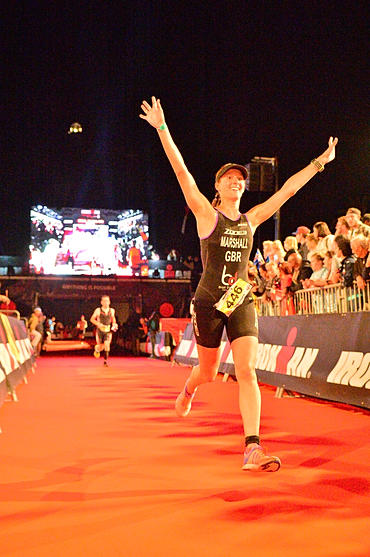 I didn't have that huge sense of achievement that I’d expected when I crossed the line, I felt disappointed that my race fell apart because of GI issues, and that my hard work on the bike and swim were wasted.  I was pleased to have finished, but not pleased that the marathon took me almost 5 hours! That's not great! I was pleased that my bike took just 5hours26 and pleased that my swim time was faster than one of the pro women.

I didn't think for a second I'd cross the line and feel disappointed. It’s a very weird mix of emotions, relief for finishing, I do actually feel immensely proud of myself for completing the distance, but also really really gutted that it was my stomach that gave up and not my legs.

I’m looking for some more IM races next year as I’ve fallen in love with the distance.  While the course in Barcelona was actually pretty boring, I’d like to go back and beat my time, aiming for 10hrXX next time - work on my run and also my nutrition strategy and learn all of the valuable lessons from this race.  Maybe, just maybe, even pack some loo roll in to my T2 bag 😉

I am an Ironman.